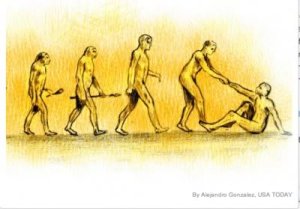 A while back I wrote a series of posts on morality and I want to attempt to tie some things up as well as respond to some common things I see people say online about non-theistic morality (some of which came up in my post on meaning).  I’ve only scratched the surface on this subject so I’m sure some of the details are not quite right.

While it’s much more complicated, in general I like to categorize the different meta-ethical views into the following:

And these 2 diagrams show you that meta-ethics is even more complicated than I’ve made it out to be: 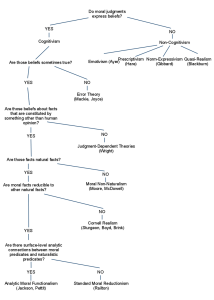 So Where Do I Stand?

I see all 4 options above as possibilities and I’m fine with all of them.  Personally, if there is a god or force or whatever that truly represents pure goodness and kindness (the parts that at least seem to be universal properties contained in that) then I’m all for it.  If it is a personal being then it’s more than welcome in my home for a cup of tea or whatever it likes to partake in.  I’d love to work with it to help make the world a better place to live in.  If living in my heart floats it’s boat then have at it.  I’d love for it to do kind things through me and make me a better, more loving and caring person.  It’s just that some versions of this god as described by the traditional monotheistic religions do not line up with what is commonly understood as goodness, and the world also seems to operate as if it is a godless one.

I explained here why non-natural moral realism seems more plausible to me than supernatural moral realism.  But if you forced me to bet on which of the 4 options is true I’d probably say it’s some mix of 3 and 4 which I sort of talked about here.  This seems most closely matched to Massimo Pigliucci’s views.

Now pick whatever meta-ethical viewpoint you want from the above list – it doesn’t matter which one represents reality to me. Either way genocide, slavery, an eternal hell, pedophilia, rape, etc. all go against my moral senses.  The moral sense can come from gods, rationality, or evolutionary factors, but again it doesn’t matter.  The moral sense is there and no matter what, there are pragmatic reasons for following them.

– Our moral senses cannot be explained without God

There seems to be some evidence against this.  Read this.

First of all, watch the video above again to see why this is misguided.  It may be a more valid objection to replace the word “atheists” with “moral anti-realists”.

If a moral anti-realist is being punched in the face for no reason at all, do you expect them to respond with “that’s cool, I don’t believe in objective morality, so if you want to punch me I have no criticism of it”?  Obviously, being in pain, they would have something to say about it.  Obviously they could say “that hurts”, and “I don’t like that” without contradicting their anti-realist stance.  However, If they said “that’s wrong” it would begin to sound contradictory to their beliefs.  I have a caveat here though – it’s not contradictory if by saying “that’s wrong” they simply mean that it’s wrong in the sense that the majority agrees with them that it’s wrong to cause pain.  Also could they say it is “unkind”?  I believe they could.  By the general definition that humans ascribe to the word “unkind” it fits without someone believing that there is some objective “unkindness” property set in place somewhere outside of human minds.  It just fits the definition that the vast majority of humans ascribe to the words “wrong” and “unkind”.  All words have some vagueness about them.  But I do empathize some when the moral realist begins to see a bit of a contradiction when moral anti-realists use the word “wrong”.

Again, for atheists who are moral realists this objection doesn’t make sense.  Brandon (who wrote the linked comment) mentioned Sam Harris, but Harris is a moral realist so it doesn’t really fit.  Brandon may not agree that Harris has a valid reason to be a realist but that is beside the point – if he is a realist he is not being fake.  If you’re unable to see how a meta-ethical viewpoint different from your own could have validity to it that’s fine, but just know that it won’t stop me from speaking against atrocities in the bible such as genocide and slavery.

Now the question does become more interesting for moral anti-realists.  But even an anti-realist may be humble enough to see that their view may be wrong and that morality really is objective.  If one was trying to evaluate the Christian worldview then in the process they would try to take on the viewpoint of objective morality. But then they become faced with the dilemma of these horrific passages which go so strongly against the moral senses of practically all human cultures.  So even an anti-realist can see how these passages go against the morality that the Christian worldview is trying to uphold. They could also feel that these passages are very clearly harmful to human society and that could go against their own desires for a better world.  Anti-realists are just as capable of having empathy as anyone else.

Topics in morality are discussed many hours of every day in ethics courses at universities across the entire world, very often without appeal to gods.  Actually it can be more of a conversation stopper to simply say “this book that I believe is the truth is the sole authority of morality”.  If the other person doesn’t see the book as an authority the conversation is over.

Lately the following has been a response to theists I’ve been giving to express my own feelings about this subject: I want life on earth for everyone to be as positive an experience as possible. It is simply a desire of mine and that desire would remain if there are moral truths that exist or not. I actually would like it if there were moral truths, and would even prefer there to be gods that existed that are somehow helping us in achieving this. I say that you and I should simply shake hands and make our best effort to work together to make our world a better place and if there are any gods that want to help out then I say “the more the merrier!”.

Where do you stand regarding objective morality?  Do you think you could place your views somewhere within the 4 listed above?

51 thoughts on “Morality Without Gods”